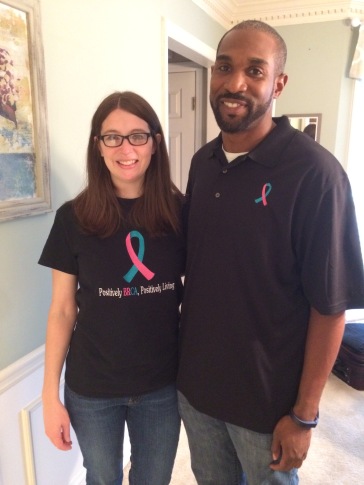 March 27 has seemed like it was a while off. Now here we are sitting at the hospital waiting to get checked in for my surgery. We met with Dr. Namnoum, the plastic surgeon, this morning so he could make all his marks for the incisions. As we wait for surgery, I thought I would take a few quick minutes to share some of this process.

When I got my BRCA positive results back in October, I already pretty much knew that if I was positive I would get a mastectomy. Who would want to play around with an 87% chance of getting breast cancer?  It’s not a risk I’m willing to take if I want to be around for Keith and the boys. Sure, I could get another type of cancer or die in a car wreck next week, but I feel like God has blessed my with this knowledge and I can at least do something about this huge risk that I know about.

After finding out I was positive, I was overwhelmed when I started to read about hysterectomies, mastectomies, mammograms, breast MRIs, and so on. I wasn’t sure where to start with everything. The hysterectomy surgery seemed pretty straight forward, but the mastectomy and reconstruction options were confusing. I started reading about the different reconstruction options and came across one called direct to implant. Most reconstruction surgeries use expanders, which are put in at the time of the surgery, and then every couple weeks you go into the doctor’s office to get them filled so they can stretch the skin. Then after a few months, you have another major surgery to switch the expanders to implants. I wasn’t really liking the things I was reading about the expanders being uncomfortable and wasn’t thrilled at the thought of two major surgeries since I work and have two small children. Direct to implant, however, seemed like a much better option. It’s a newer technique where the doctor puts the implants in directly after the mastectomy procedure, so there is only one major surgery. I started researching this technique and found there are only a few doctors in Atlanta who do this procedure. I found one who was in network with my insurance and started researching him.

Researching Dr. Namnoum, my plastic surgeon, I came across a woman’s blog who had just had this procedure done with him about a year earlier. She is BRCA positive like me and has two little boys. Turns out, out of all of Atlanta, she lives ten minutes from me. Only God. I had been praying for people to help me through this process and I knew this was an answer to prayer. We met for coffee and it was amazing to sit face to face with someone who had gone through this and was now on the other side of it. I wish I could go into more about what a huge blessing Lauren has been to me, but that is a story for another time.

After meeting with Lauren, I felt confident I wanted to proceed with Dr. Namnoum since she spoke so highly of him. Keith and I met with him and he talked us through the procedure and recommended a breast surgeon, Dr. Redden. She will perform the mastectomy, then Dr. Namnoum will come into the OR to place implants, do a breast lift, and fat grafting from my abdomen to fill in some of the breast. It will be about a six hour surgery, but I’m glad everything can be done at once. I will share more details later when time permits.

Finally, I just want to be clear about one thing. I know people don’t understand the details of everything, but this is not a cosmetic procedure. I’m not excited to go through this and would much rather keep my body as it is. There are risks to putting something foreign in your body and most people don’t realize I will no longer have any feeling in my breasts. It will be an adjustment as I get use to a new normal, but these are things I have to accept to be able to reduce my risk of breast cancer by over ninety percent.

Ok surgery time. Keith will be updating here later. Thanks for your prayers and support. We appreciate it more than you know!

They just took Laura back for surgery. Naturally she was nervous but resting in the peace of the Father. We spoke with Dr. Redden, Laura’s breast surgeon, right before Laura went back. She will be giving me an update in a couple of hours.

I just spoke with Dr. Redden. The mastectomy is complete and Laura’s pathology came back clear. No trouble spots…no cancer cells identified. TAKE THAT BRCA! A more detailed pathology will be taken over the next couple of days, so we are believing that the results will continue to be negative for cancer. Dr. Namnoum has now begun the reconstruction and will give me an update once the surgery is complete. KEEP PRAYING!!!

Laura is out of surgery! I just spoke with Dr. Namnoum and he said that everything went well. In fact, he said the surgery couldn’t have gone any better. He said that Dr. Redden did a fantastic job and left things in such a way that he was allowed to do some really good work. He also said Laura was pretty emotional, so please pray for her emotional wellbeing as well as her physical recovery in the days in weeks ahead. The road will be long, but BRCA got another punch to the gut It was a tough challenge, but our God is much stronger and much tougher and for that we are grateful.

On another note, I was blessed by several people while I was waiting during Laura’s surgery. An old family friend’s father was in town for work. She told him what was happening with Laura so he decided to stop by. We had a chance to catch up on life and he gave me some good encouragement. About the time that he was about to leave, my friend Bryan came in. The three of us were able to pray together in the waiting room. There were not many people in here, but it was evident that we were believers which I hope served as a witness to those around.

A little later another friend from my discipleship group, Will, stopped by. Him, Bryan, and I were able to have some good conversation and we got in some good laughs which helped the time pass by. Right before we left we engaged in conversation with a man name Dale. His wife, Stephanie, was also having a, what they thought, was a preventative mastectomy. Turns out she had an aggressive form of cancer that will require a year of chemo. As Bryan and Will were leaving we gathered to pray and Dale joined us. At the end of the prayer he said “it’s great to have brothers everywhere.” It was such a blessing to be able to pray with him and encourage his heart.

In closing, please continue to pray for our family as Laura begins the recovery process. I also ask that you pray for Dale and Stephanie as they have a very tough road ahead. Thank you all for your support. Laura will post an update as soon as she is feeling up to it!

In HIS Mighty Grip,

6 thoughts on “The (Second) Big Day Has Arrived…”